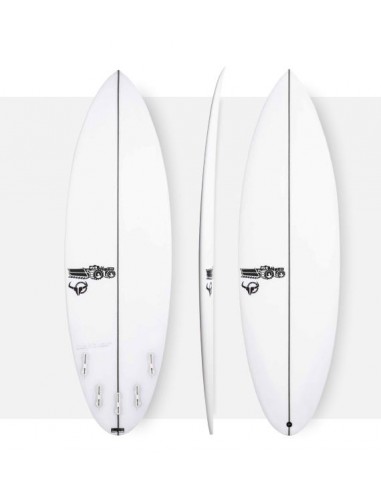 Occy’s step down, the Bullseye, accentuates all of the small wave features the Raging Bull already has in spades. Ridden 2-3 inches shorter and wider than its big brother, the Bullseye is built to keep you catching a lot of waves and flying down the line when other boards would be struggling. You’ll enjoy most of the same key design features as the Raging Bull throughout, with its wide point pushed forward and even more foam redistributed under your chest / front foot. Complemented by a flatter entry rocker, these elements work together to get you valuable paddle power and instant acceleration up to wave speed. Unique to the Bullseye however is a slight vee in the nose, a forgiving addition that lifts the forward rails out of the water in steeper sections and helps to initiate turns with less effort – especially useful in weaker surf. This moves to a moderate single to double concave for extra lift and easy rail-to-rail transitions. Similar to the Raging Bull, the Bullseye’s pulled-in tail and slight curve in the exit rocker lets you hit sections hard whenever possible. The Bullseye has been fine tuned for Occ since he’s retired (mostly) from competing, but not from surfing. It’s versatile and user-friendly enough to be a daily motivation if you want to be in the water more than ever, keeping you sharp to surf your best, and then jump on a Raging Bull for pumping waves without missing a beat.